(Ahmad, Darimi, and Baihaqi in Shu’ab-ul-Iman transmitted it).

[1] The prayer would provide with a clear evidence in support of the fact that he is an obedient servant of Allah and a God-fearing person and is thus entitled to salvation.

[2]  Qarun (Korah), Pharaoh and Haman were enemies of Prophet Moses and were all notorious for their unbelief and evil deeds.

[3]  Ubayy b. Khalaf was the staunch enemy of Allah’s Apostle and was killed in the battle of Uhud.

Ibn ‘Umar reported Allah’s Messenger (peace and  blessings of Allah be upon him) as saying: Prayer in congregation is twenty-seven degrees more excellent than the prayer observed individually.

(1394) Abu Huraira reported Allah’s Messenger (may peace and blessings be upon him) as saying: A man’s prayer in congregation is more valuable than twenty degrees and some above them as compared with his prayer in his house and his market, for when he performs ablution doing it well, then goes out to the mosque, and he is impelled (to do so) only by (the love of congregational) prayer, he has no other objective before him but prayer.  He does not take a step without being raised a degree for it and having a sin remitted for it, till he enters the mosque, and when he is busy in prayer after having entered the mosque, the angels continue to invoke blessings on him as long as he is in his place of worship, saying O Allah, show him mercy, and pardon him!  Accept his repentance (and the angels continue this supplication for him) so long as he does not do any harm in it, or as long as his ablution is not broken.

Note # 897   Iman Bukhari, on the basis of this hadith, draws the conclusion that the man who is without ablution is not one who is defiled: he is permitted to enter the mosque (Fath al-Bari, Vol. II. P. 267).

(1396) Abu Huraira reported Allah’s Messenger (may peace and blessings be upon him) as saying: The angels invoke blessings on everyone among you so long as he is in a place of worship with these words:  O Allah pardon him!  O Allah, have mercy upon him, (and they continue to do so) as long as the ablution (of the worshipper) is not broken, and one among you is in prayer as so long as he is detained for the prayer.

Note # 898   What it means is that the angels begin invoking blessings upon him the time the worshipper enters the mosque after performing ablution and they continue to do so as long as he waits for the congregational prayer, then observes it. 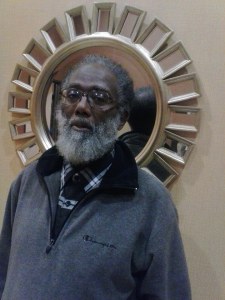