(“Refrain from Sins!”) Minor Sins Can be Pardoned if One Refrains from Major Sins 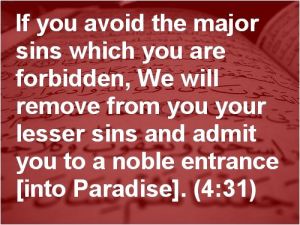 meaning, if you avoid the major evil deeds that you were prohibited We will forgive you the minor evil deeds and will admit you into Paradise; (Quran 4:31).

This is why Allah said:

There are several Hadiths on the subject of this honorable Ayah.

Imam Ahmad recorded that Salman Al-Farisi said: “The Prophet said to me, `Do you know what the day of Al-Jumu`ah is?’

I said, `It is the day during which Allah brought together the creation of your father (Adam).’

I know what the day of Jumu`ah is. Anyone who takes a bath and cleans himself as much as he can and then proceeds for the Friday prayer and remains quiet until the Imam finishes the prayer, all his sins in between the present and the next Friday will be forgiven, as long as major sins were avoided.”

In the Two Sahihs, it is recorded that Abu Hurayrah said that the Messenger of Allah said:

The people inquired, ‘O Allah’s Messenger! What are they?

الشِّرْكُ بِاللهِ
To join others along in worship with Allah.

وَ السَّحْرُ
Magic [belief in, and (or) practice].

وَ التَّوَلَّي يَوْمَ الزَّحْفِ
To turn away from the enemy and flee from the battlefield when the battle begins, and

و قَدْفُ الْمُحْصَنَاتِ الْمُؤْمِنَاتِ الْغَافِلاَت
To accuse chaste women, who never even think of anything that would tarnish their chasity and are good believers.

Imam Ahmad recorded that Anas bin Malik said:  The Messenger of Allah mentioned the major sins, or was asked about the major sins. He said:

Shu’bah – one of the narrators of the Hadith said: “Most likely, in my opinion, he said, ‘False testimony.'”

The Two Sahihs recorded this Hadith from Shu’bah from Anas.

Another Hadith in the Two Sahihs, it is recorded that Abdur-Rahman bin Abi Bakrah said that his father said the Prophet said:

He was reclining, then he sat up and said:

ألاَ وَ شَهَادَةُ الزُّورِ ، ألاَ وَقوْلُ الزُّور
“And I warn you against the false testimony, and false speech;” and he continued repeating it until we wished that he would stop.